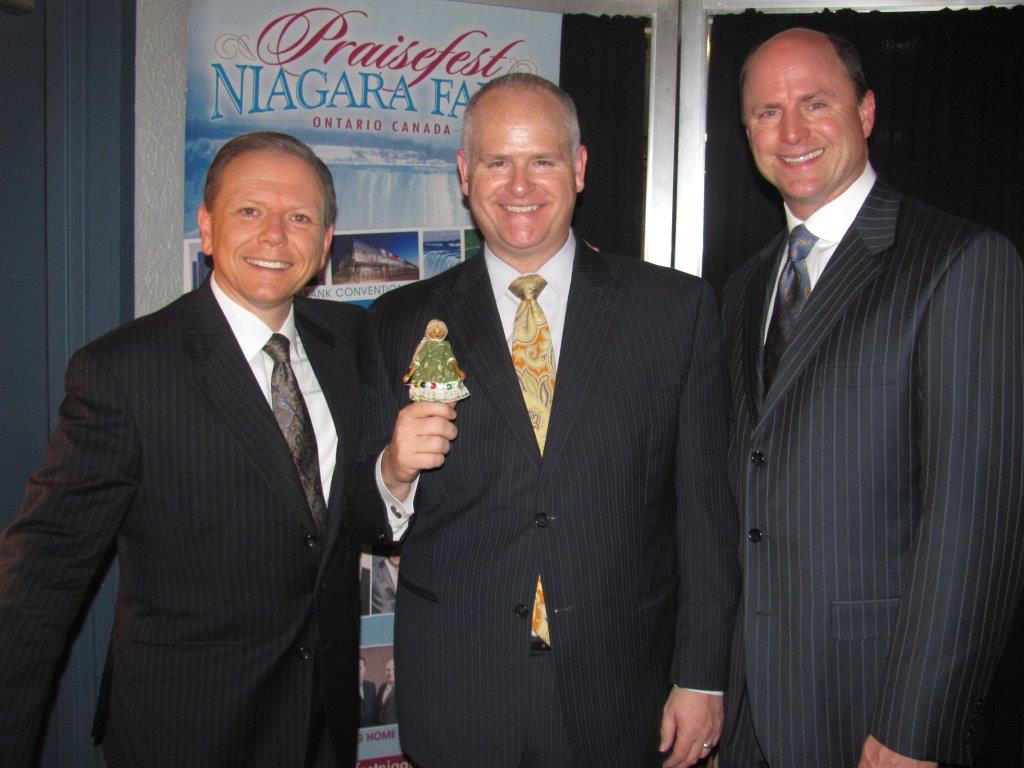 Our family enjoys the music of the Southern Gospel trio, Greater Vision, made up of Gerald Wolfe, Rodney Griffin and Chris Allman.  They were in concert in Bath, NY recently and our family was eager to go see them again live in concert!

Penny was excited to be able to go and shake hands with these fellows herself, and to sing along with all her favorite songs! 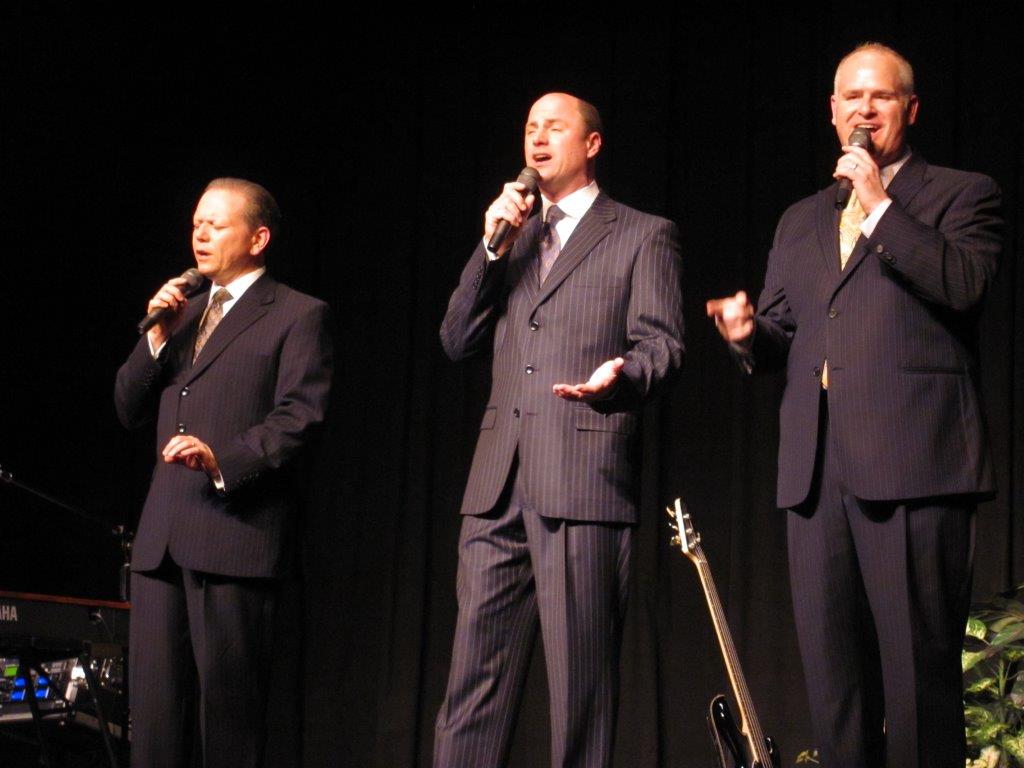 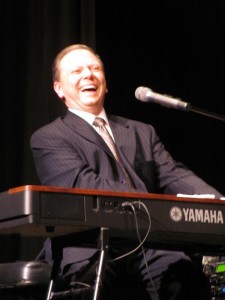 Gerald Wolfe is the lead singer, and emcee.  He used to be a member of the legendary Cathedral Quartet with beloved members George Younce and Glen Payne.  Gerald is also a great piano player, and is a lover of the old songs, especially the hymns written in shaped notes in the old red Church Hymnal. 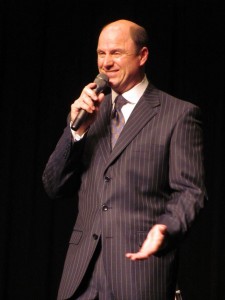 Rodney Griffin is a popular song writer in the Southern Gospel field, in fact, is known as the Singing News Fan Awards Song Writer of the Year for 13 years!  Papa Dart likes how his songs reflect his rich study of Scripture.  His songs are thoughtful, fun, unique and inspiring. 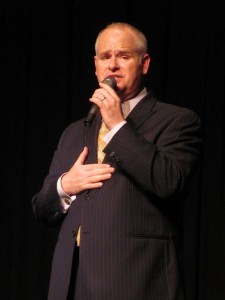 Chris Allman is the tenor and is also a songwriter.

We hope you enjoy these video clips we took at the concert.  The first song portion is called No Longer Chained, written by Rodney Griffin.  It tells of Paul imprisoned for his faith, whose story is told in the book of Acts.  In prison he was chained to a Roman soldier, and this song is from the soldier’s point of view as he hears the gospel message from his unusual prisoner.

This next is a favorite of ours, a portion of the hymn “I Sing the Mighty Power of God” sung so mightily!

And now a bit of Rodney’s testimony about his alchoholic father who met a common ordinary man with a wholehearted love for Jesus, Bill West.  When none of the highly gifted people could reach his dad, Bill West’s simplicity and compassion met a need in his dad’s heart and created a hunger for the Savior, which our Lord happily met!

We have gotten to know these men through building our collection of their CDs and DVDs, and seeing them in the popular Jubilee DVDs, and by attending their concerts when they are in the area.  We enjoy their humor and their heart for ministry.  You can learn more about them at their website www.greatervisionmusic.com.

Here is Penny relaxing at home near the stereo with her kitty, Ruby, listening to CDs of Greater Vision, recalling how special it was to be there at the concert hearing them in person. 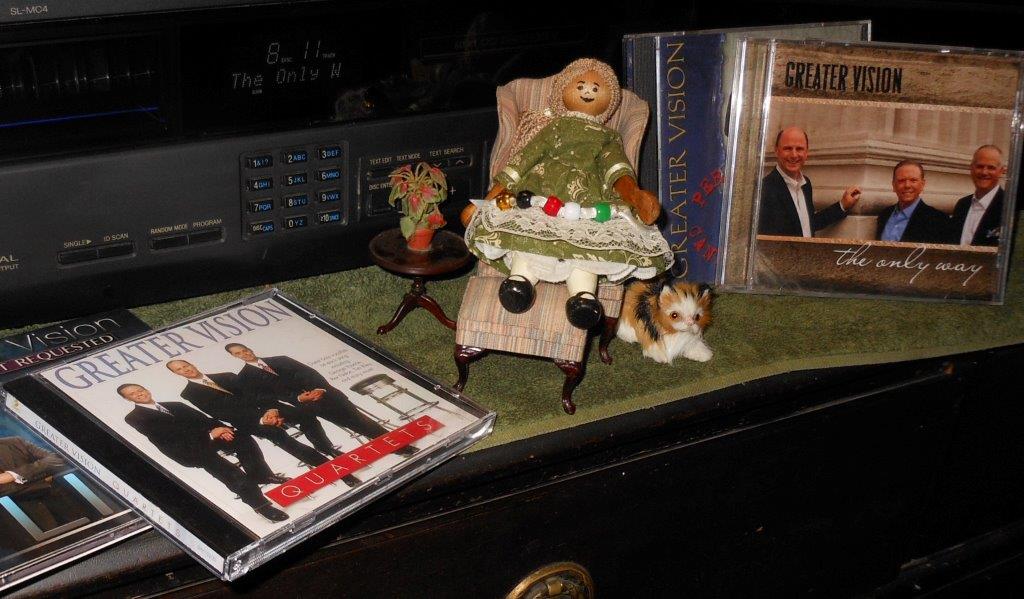 One of their classic songs is this one written by Rodney Griffin.  It is a favorite of mine, below are the words. 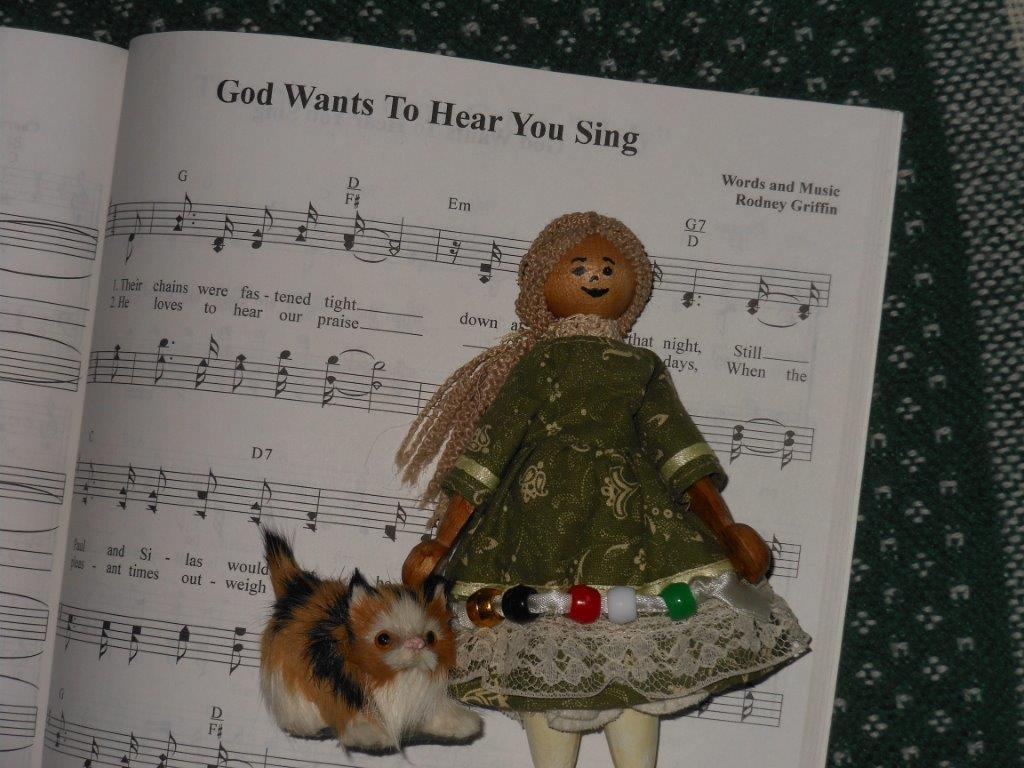 God Wants to Hear You Sing 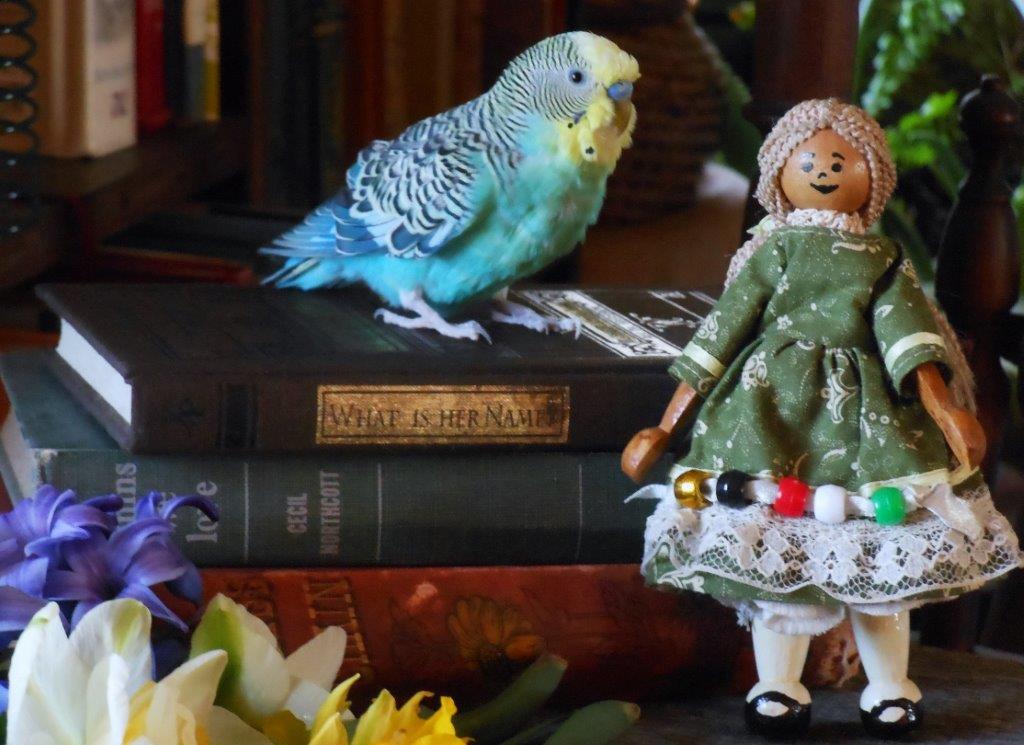 Pixie and Penny together make a joyful noise to the Lord!

Who better to sing with than a talented bird??

How Penny is Made 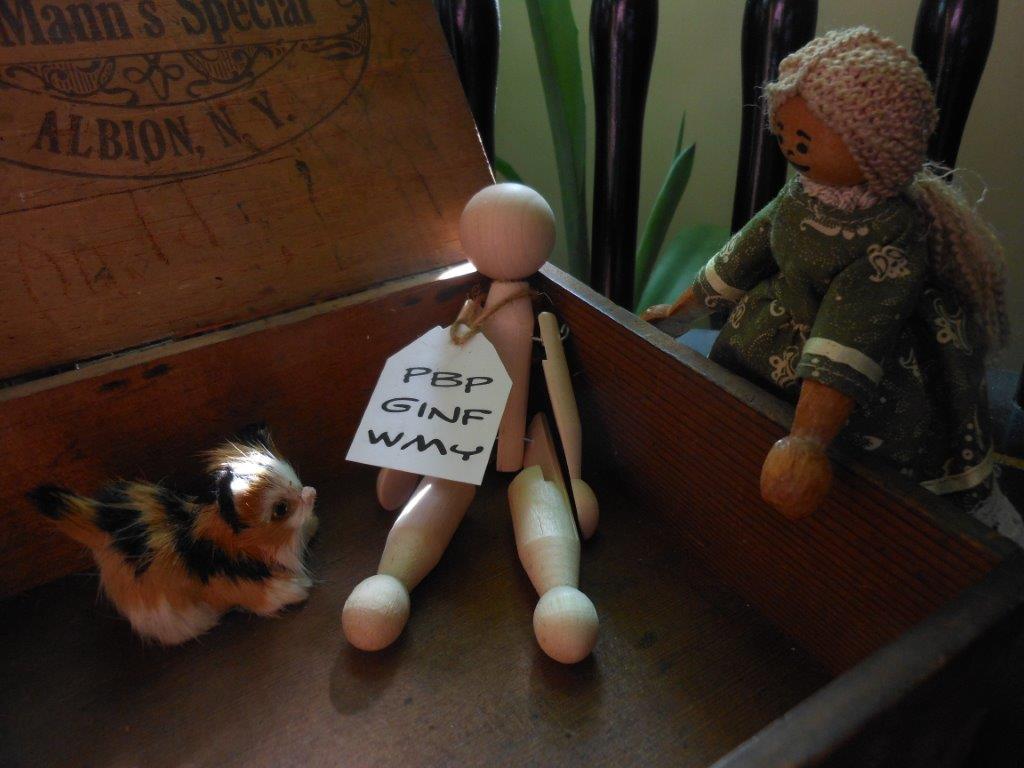 Are there days when you would like to wear a tag like this around your neck?  It stands for ” Please be patient, God is not finished with me yet!”  Or maybe tag it on the people around you?  We all require a lot of patience! 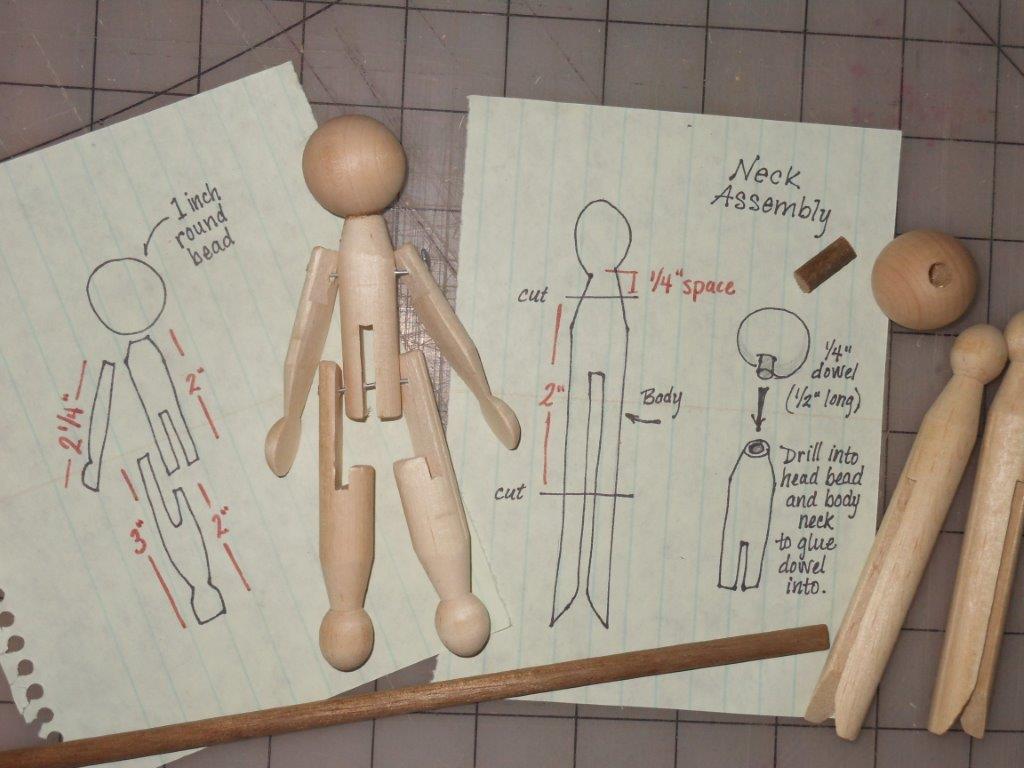 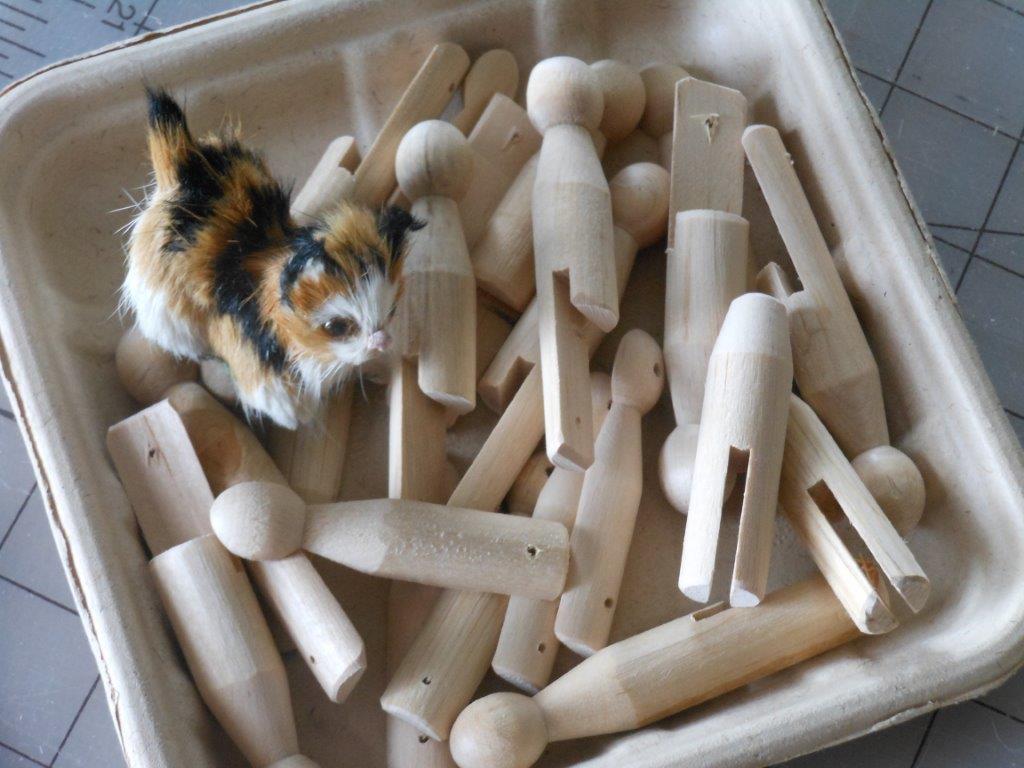 The illustrations above will guide you as to where to cut the clothespins.

One clothespin is cut down its length to provide for two arms, then each are trimmed to 2 1/4″ long.

The two legs are cut with two different lengths to allow for the legs to swing:  3″ on the outside and 2″ on the inside.

The body part is cut 1/4″ below the clothespin head so that the remainder will be thick enough to drill with a 1/4″ drill bit, then trimmed to 2″ long.

The head bead will also need to be drilled to accommodate the 1/4″ dowel.

I use a 1/16″ drill bit to make the holes for the wire hip and shoulder joints.  My wire is 19 gauge steel wire. 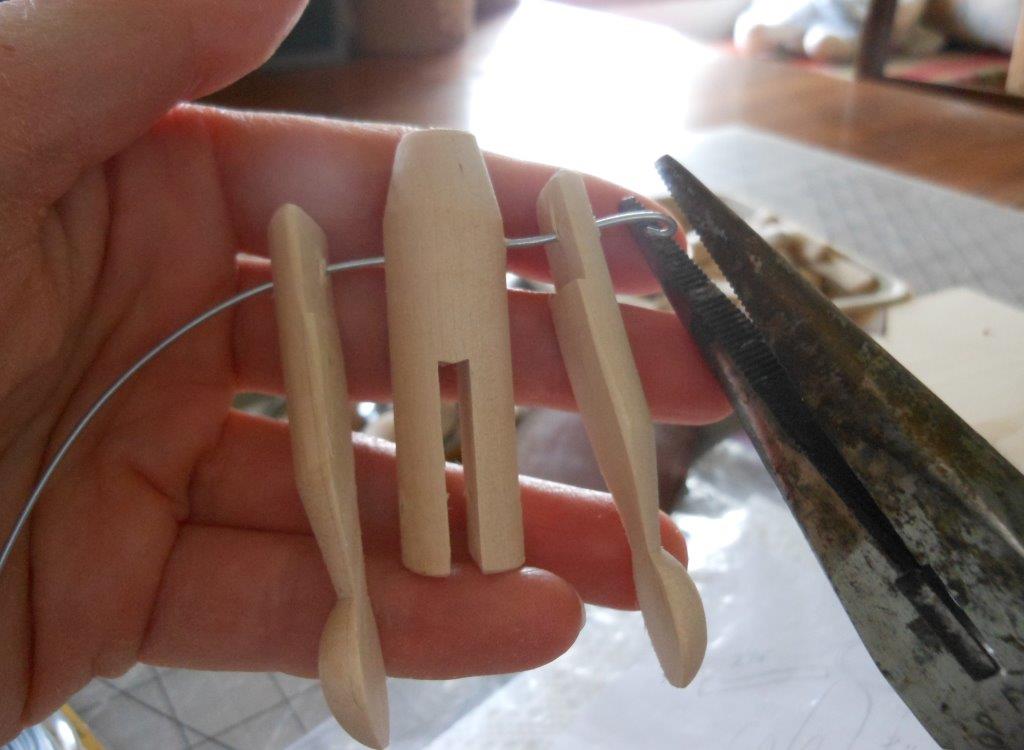 Fold over one end of the wire with pliers in a tiny twist, to hold the shoulder and hips, then turn it down flat against the clothespin so they do not stick out.   Be sure and leave all the joints loose so that the limbs will swing freely, remember that once the doll is dressed, it will be harder for the arms to swing past the hips, etc.

This is how I have been attaching the head, using a 1/4″ dowel glued both into the head bead and into the body. 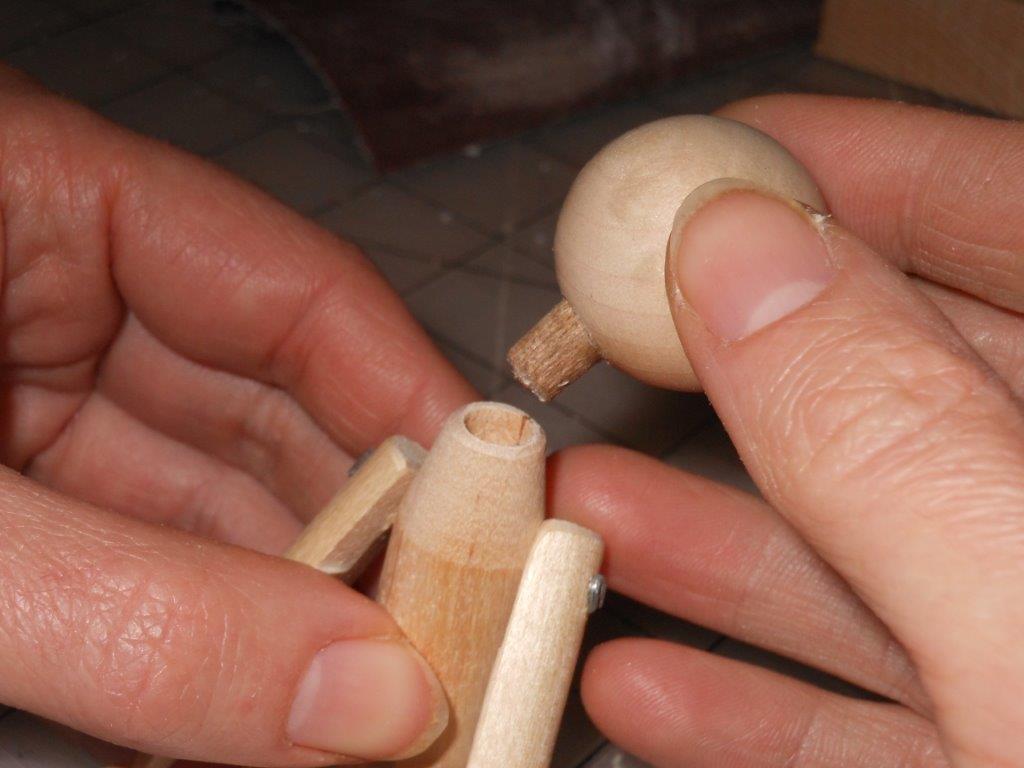 Once the body is assembled, I add the face and paint on details for socks and shoes.

I am on the lookout for fine yarn to use for natural looking hair.  I wrap it to fit over the head at the length I want, then sew a seam with a sewing machine where a part would be on top of the head, and hot glue it into place.  It is fun to trim the length and glue it into a hairdo that fits your doll.  This is the point where you suddenly see a personality looking back at you and you fall in love with what you have created! 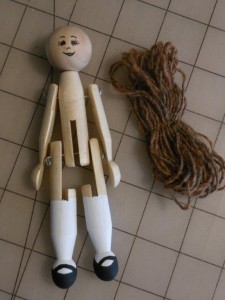 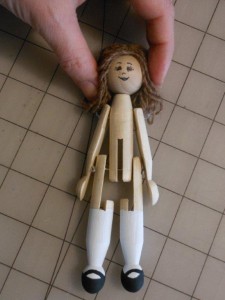 Here is a sample of dolls that I have made, I will be posting soon on how to make clothing! 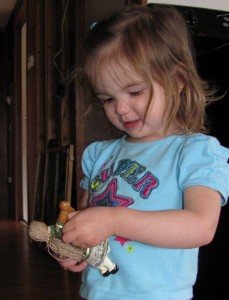 Penny has been visiting at my brother Tim’s house!

Abby went to visit for several days to help out in the greenhouse and around the house with Jess and our two little neices.  Here is Audrey greeting Penny, she’s ready to play the “gentle” hostess.

Tim has 3 greenhouses on his farm.  Two of them are shown here full of flowers: flower packs, pots and hanging baskets, all growing so beautifully green and accented with bright flower colors.  Abby took Penny for a tour and took some really nice pictures.  Thank you, Abby!

The next greenhouse is ready to be filled with vegetable plants of all sorts: tomatoes, peppers, melons, cucumbers and all.  Greenhouses are a great place to get a head start on spring while the snow is still flying outside.  Feast your eyes on these pictures and imagine you can smell the warm moist air, the damp soil and the breath of green plants that are happy to be alive! 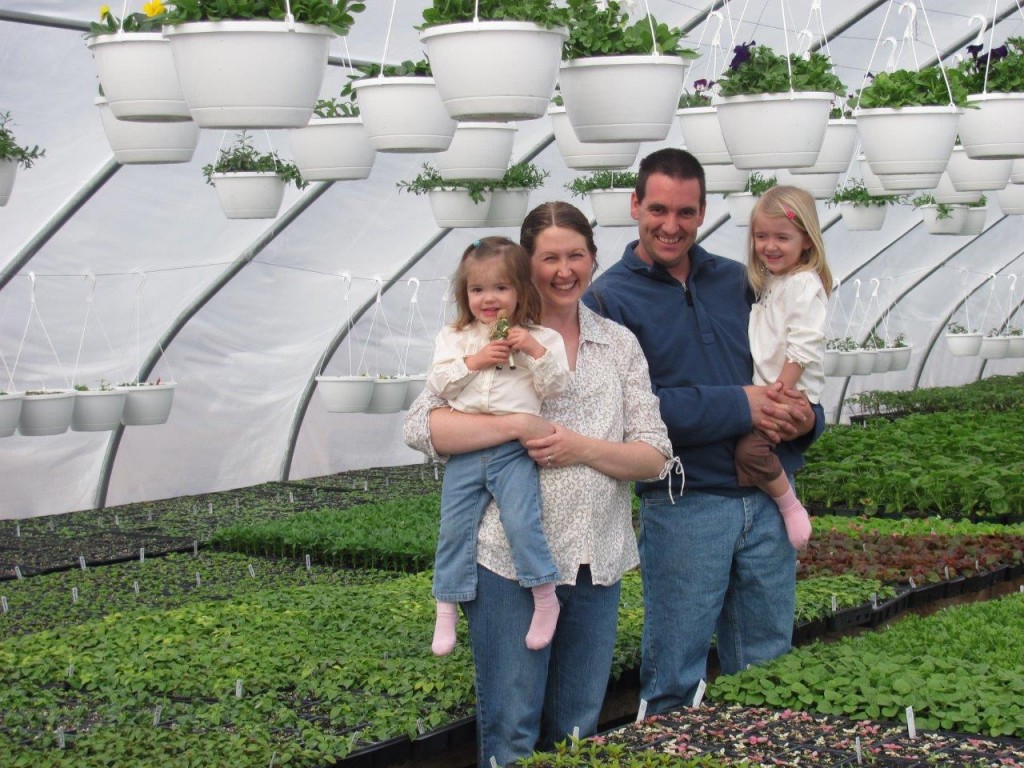 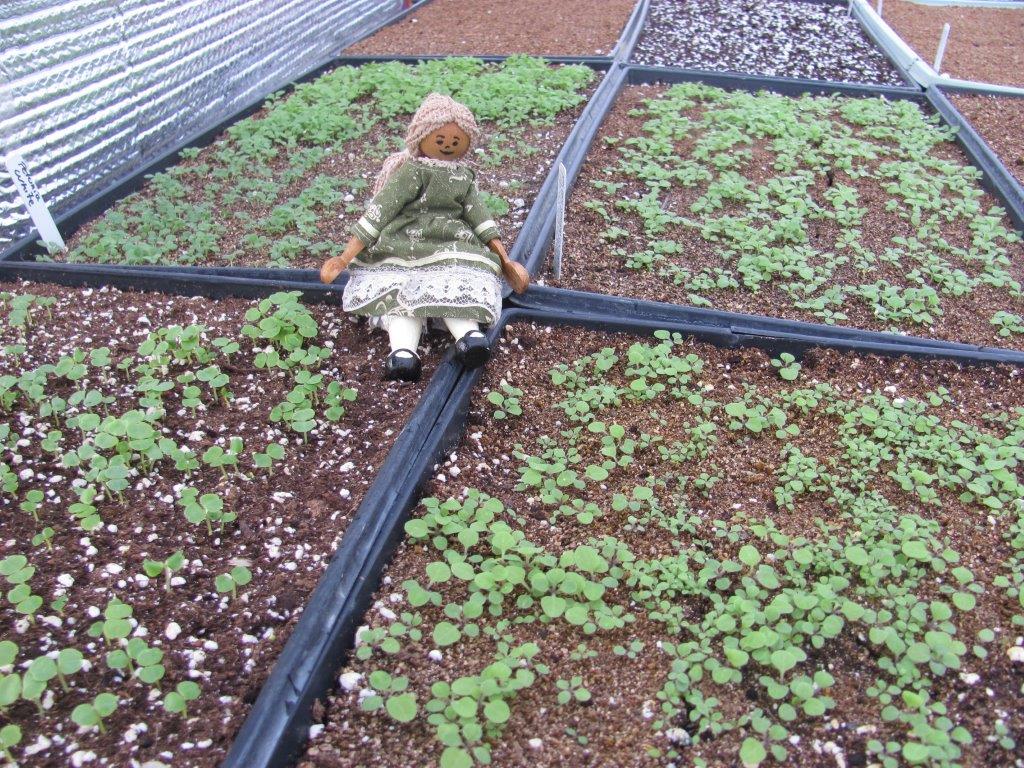 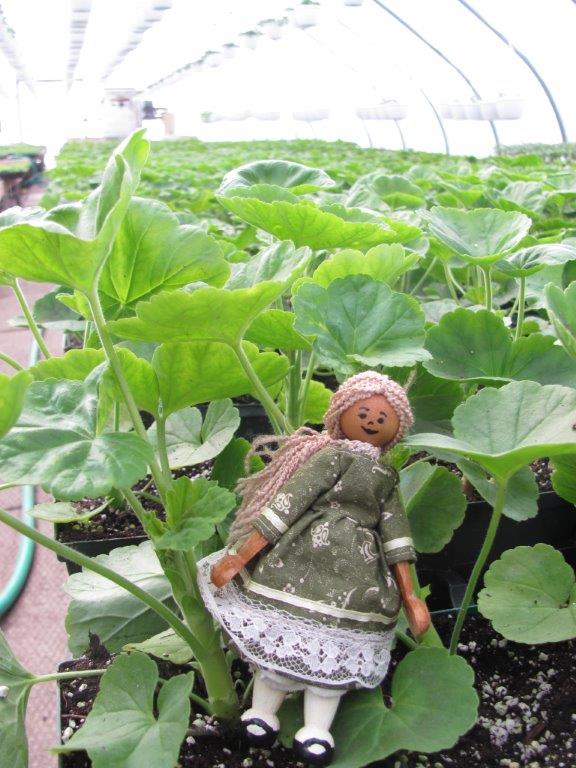 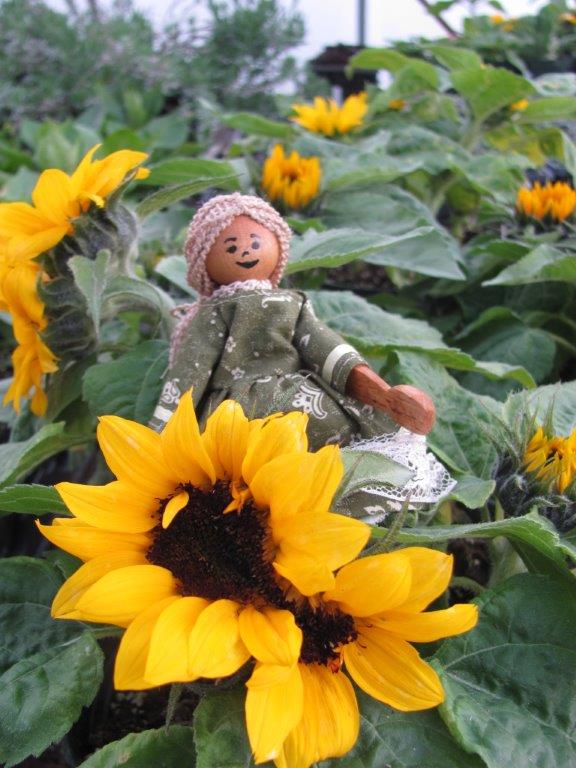 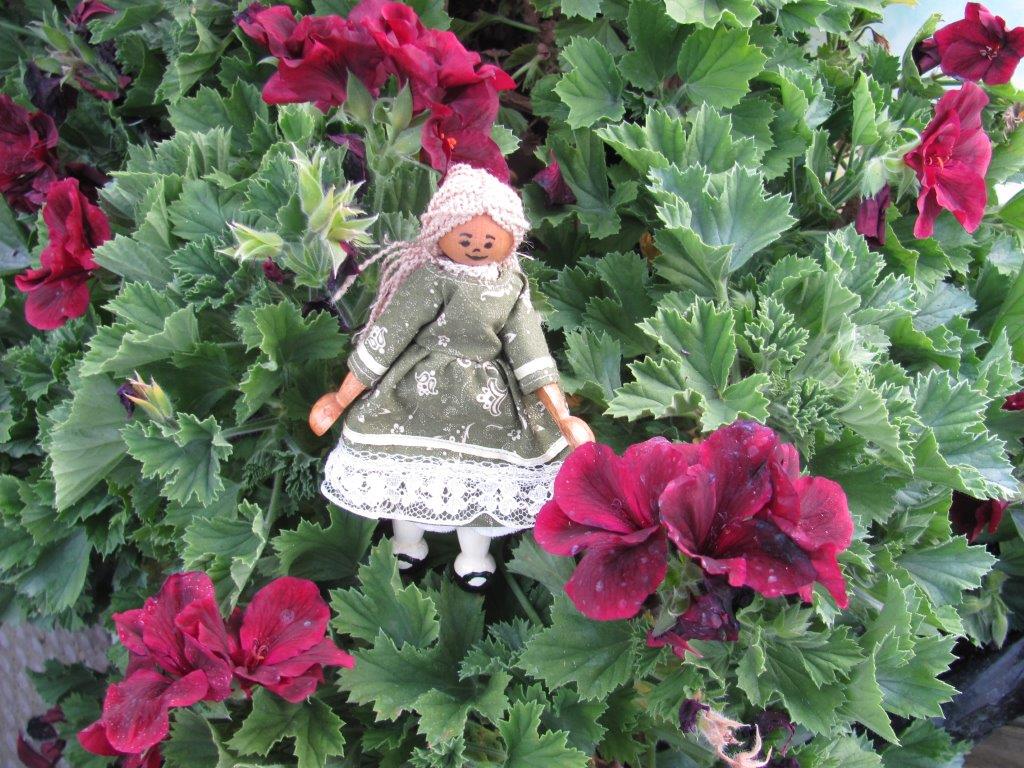 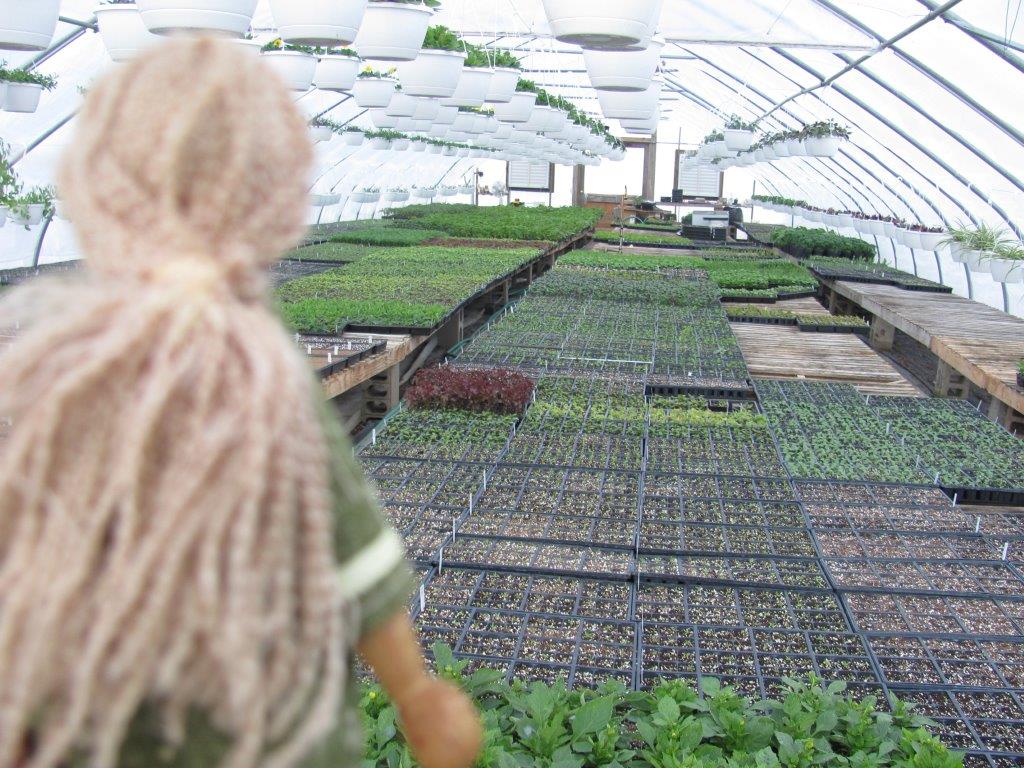 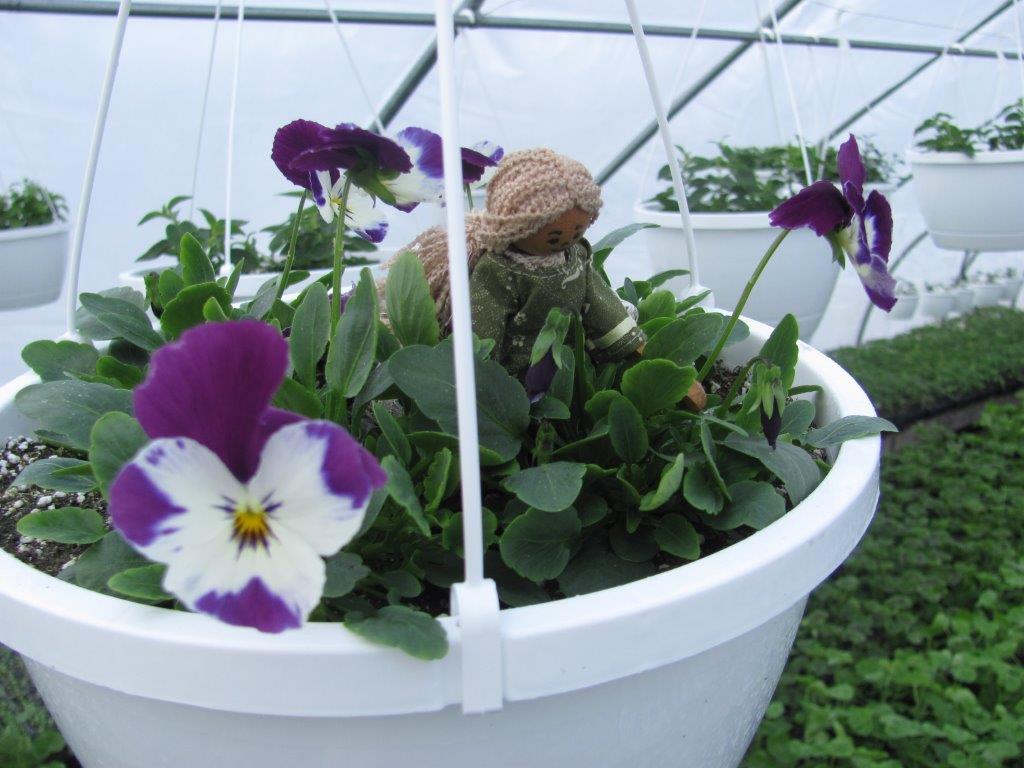 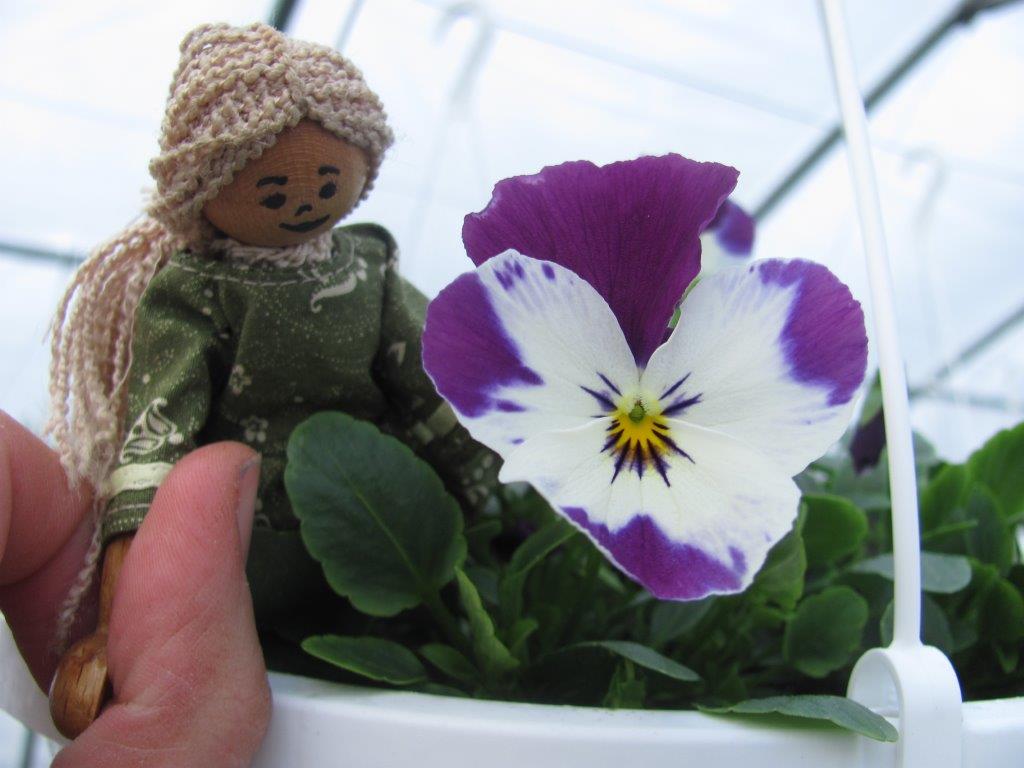 These little neices know that wherever Aunt Abby is there is lots of tickling and laughing going on!  Fun, fun, Abby!   Emma is 3 1/2  and Audrey just turned 2. 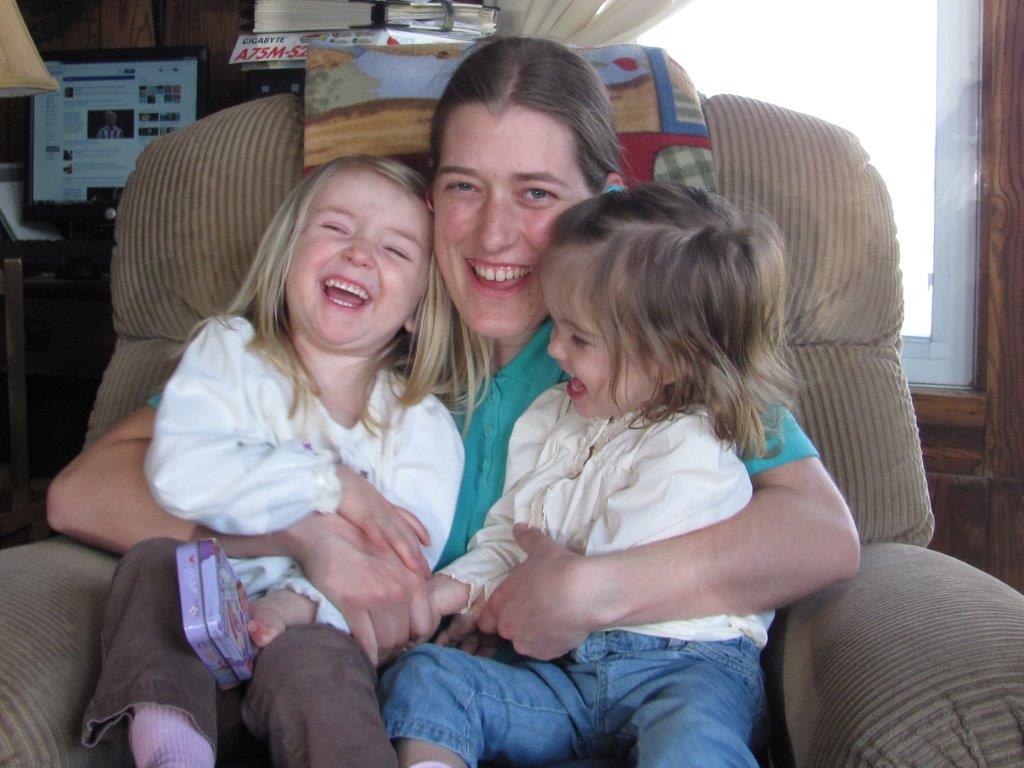 This was the final day of Abby’s stay there at Tim and Jess’, she helped with hosting a birthday party for Audrey.  Mama Dart is in the background on the couch with Mike.  What a fun, festive ice cream cake! 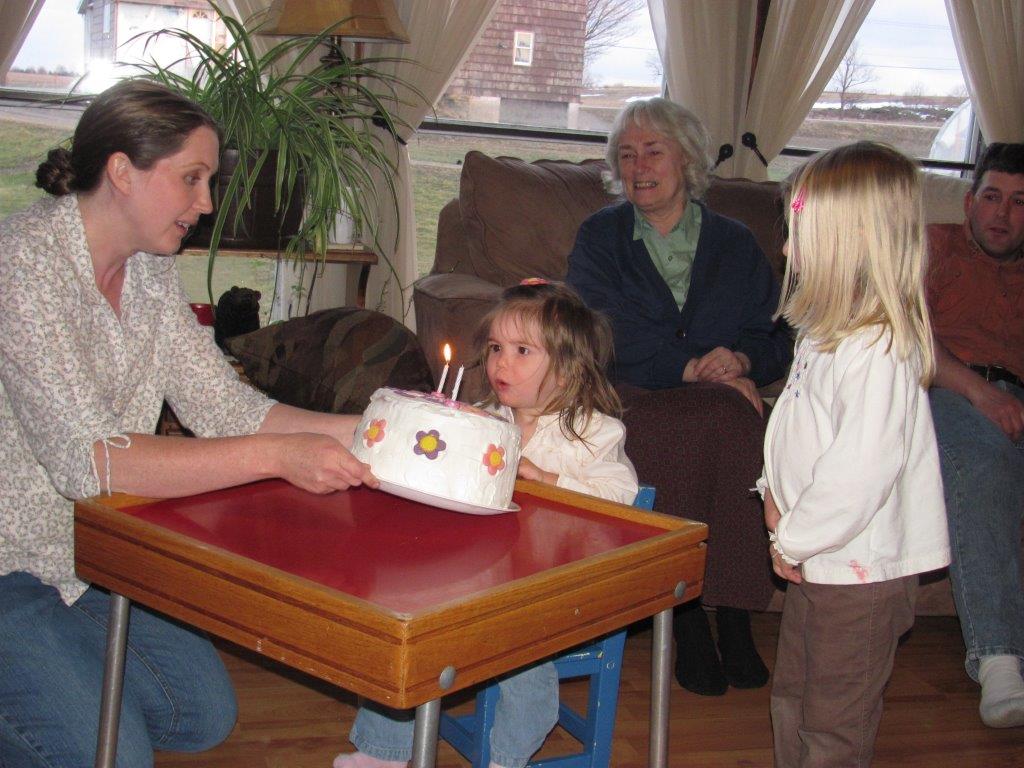 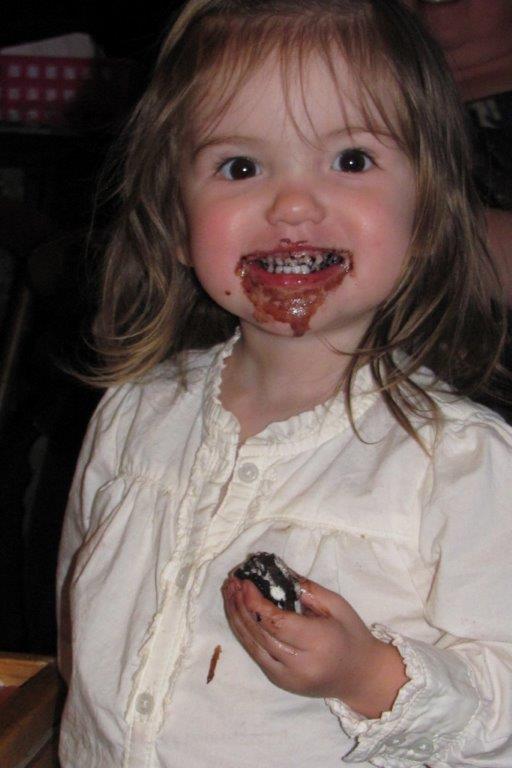