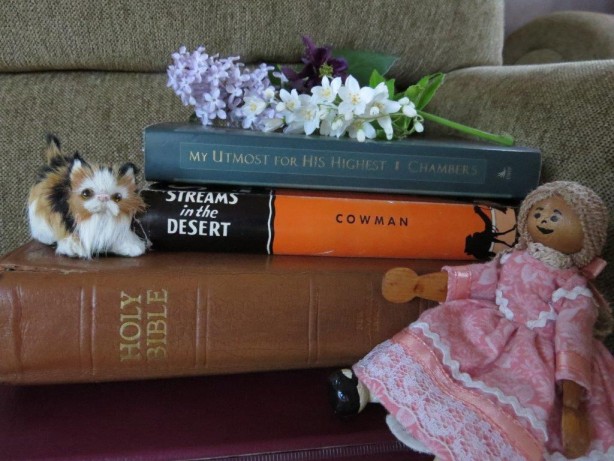 This is the stack of books my mother uses for her daily devotions.  “My Utmost for His Highest” by Oswald Chambers is an old favorite of hers.  This year she found an old copy of “Streams in the Desert” by Mrs. Charles E. Cowman and it has really become special to her.

I have enjoyed hearing from her about favorite entries that she has found encouraging.  Most recently she printed out and shared with me a copy of the May 22 entry based on Psalm 37:5, featuring a special translation of that verse, in the Young’s Literal Translation. 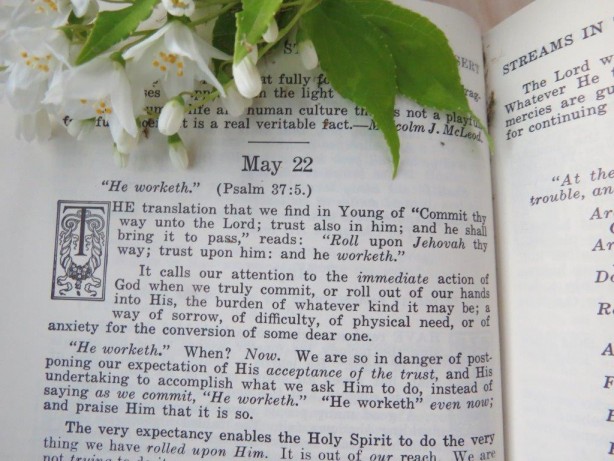 Here it is in full:

The translation that we find in Young of “Commit thy way unto the Lord; trust also in him; and he shall bring it to pass,” reads: “Roll upon Jehovah thy way; trust upon him: and he worketh.” It calls our attention to the immediate action of God when we truly commit, or roll out of our hands into His, the burden of whatever kind it may be; a way of sorrow, of difficulty, of physical need, or of anxiety for the conversion of some dear one.

“He worketh.” When? Now. We are so in danger of postponing our expectation of His acceptance of the trust, and His undertaking to accomplish what we ask Him to do, instead of saying as we commit, “He worketh.” “He worketh” even now; and praise Him that it is so.

The very expectancy enables the Holy Spirit to do the very thing we have rolled upon Him. It is out of our reach. We are not trying to do it any more. “He worketh!” Let us take the comfort out of it and not put our hands on it again. Oh, what a relief it brings! He is really working on the difficulty.

But someone may say, “I see no results.” Never mind.

“He worketh,” if you have rolled it over and are looking to Jesus to do it. Faith may be tested, but “He worketh”; the Word is sure!
–V. H. F.

I will cry unto God most high; unto God that performeth all things for me (Ps. 57:2)

The beautiful old translation says, “He shall perform the cause which I have in hand.” Does not that make it very real to us today? Just the very thing that “I have in hand”–my own particular bit of work today, this cause that I cannot manage, this thing that I undertook in miscalculation of my own powers–this is what I may ask Him to do “for me,” and rest assured that He will perform it. “The wise and their works are in the hands of God.”
–Havergal

The Lord will go through with His covenant engagements. Whatever He takes in hand He will accomplish; hence past mercies are guarantees for the future and admirable reasons for continuing to cry unto Him.
–C. H. Spurgeon

Mom’s sharing has led me to hunt up online an old copy of this book for myself.  You just can’t beat the feel and smell of an old book, and how it soon becomes an old friend.  Her copy is from 1965, and mine is from 1975.  I am so thankful for the encouragement of this devotional.

Yesterday’s entry (May 30th), was a beautiful one about the song the angels cannot sing.  The song that we learn only in our valleys of pain and suffering.  Sorrow is our school, and there we learn to sing sweet melodies of praise.  Today’s (May 31st), tells about how the strain and wear of an old ship improves the quality of its wood, deepening its beauty and value. 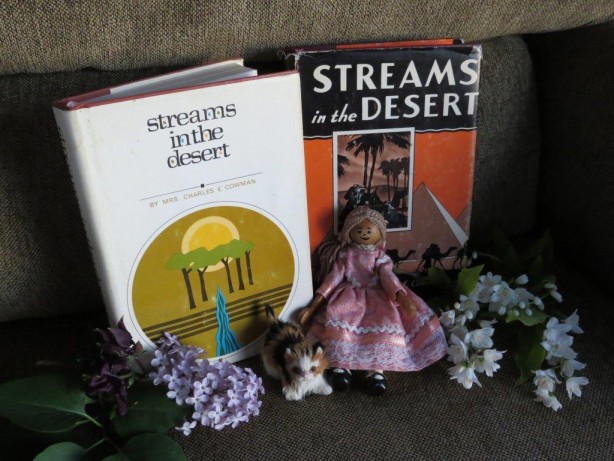 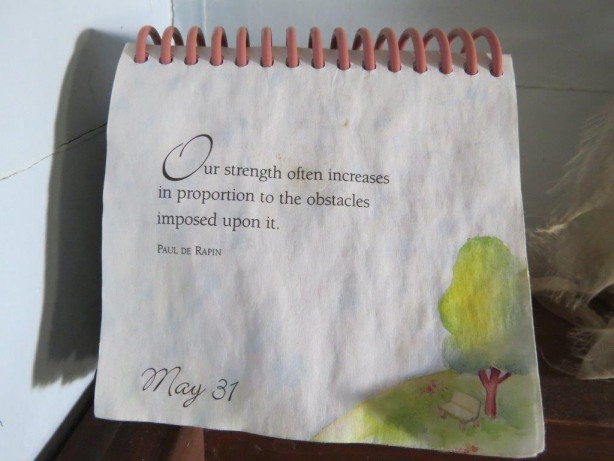 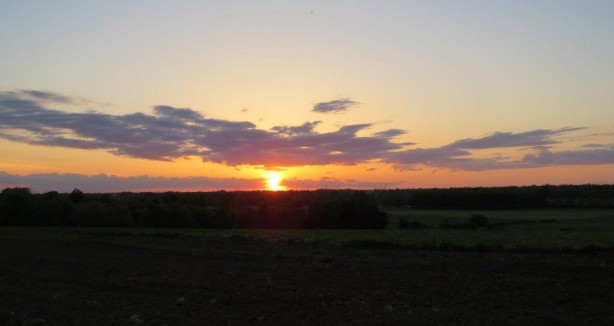 Categories: Our Farm, Penny at Home
Comments: No 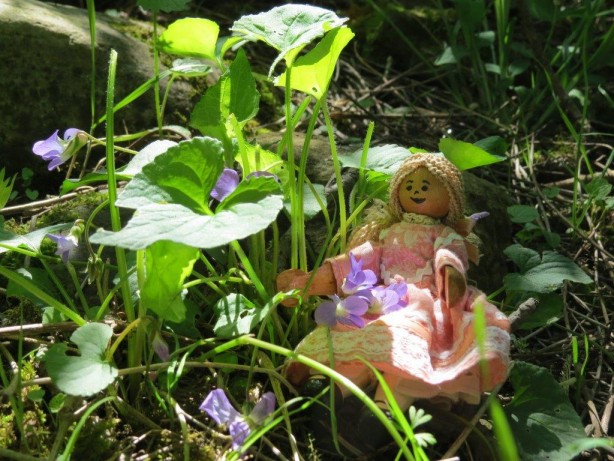 I have recently read Helen Keller’s book, “The Story of My Life”, written by her in 1967.  The challenge of being without both gifts of seeing and hearing just boggles my mind.  I read once that it is a good exercise to limit ourselves sometimes just to learn to appreciate those things we have more.  Penny wanted to try it herself, so you will see her blindfolded in some of the following pictures as she tries to experience things from Helen Keller’s view.

Helen Keller was born on June 27, 1880, in Tuscumbia, in northern Alabama.  She lost her sight and hearing after an illness when she was 19 months old.  Her parents were so thankful that she recovered from the dangerous fever, but what a shock to slowly discover that she could no longer see or hear.

In her book Helen describes her home then as being a little rose-bower.  I love this:  “It was completely covered with vines, climbing roses, and honeysuckles.  From the garden it looked like an arbor.  The little porch was hidden from view by a screen of yellow roses and southern smilax.  It was the favorite haunt of  hummingbirds and bees… Its old-fashioned garden was the paradise of my childhood…guided by the sense of smell, I would find the first violets and lilies.”  Imagine sniffing out those violets in the picture above without the help of your eyes. 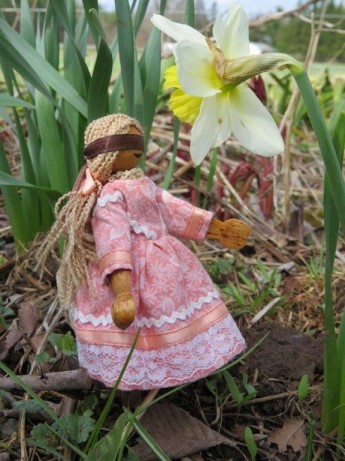 As Helen grew, so did her frustration at not being able to express herself.  Then in March of 1887, Anne Sullivan came to help 6 year old Helen.  Imagine not even knowing that things had names.  Anne taught Helen the manual alphabet, and her understanding began to form when she learned that a certain series of hand signals meant “water”, that cool something pouring over her hand at the pump.  This excited  Helen and she began to ask the signs for everything she could reach.

Miss Sullivan was a life saver for Helen’s family that simply did not know what to do with their child.  Helen was very spoiled and ill-mannered.  She was allowed to do as she pleased and displayed a nasty temper.  But with the help of her teacher, Helen learned how to control herself and to communicate through signs. 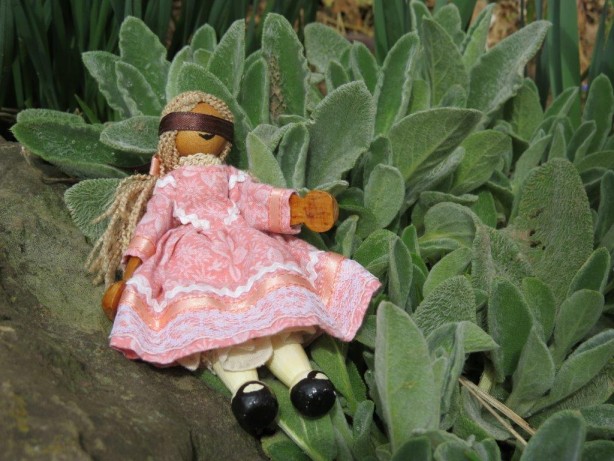 “I recall many incidents of the summer of 1887 that followed my soul’s sudden awakening.  I did nothing but explore with my hands and learn the name of every object that I touched; and the more I handled things and learned their names and uses, the more joyous and confident grew my sense of kinship with the rest of the world.”

Her lessons were out of doors, learning all about the delights of the world she lived in and the marvels of nature.  “Miss Sullivan taught me to find beauty in the fragrant woods, in every blade of grass, and in the curves and dimples of my baby sister’s hand.”

“Indeed, everything that could hum, or buzz, or sing, or bloom had a part in my education.”

“At the beginning, I was only a little mass of possibilities.  It was my teacher who unfolded and developed them…  she has not ceased trying  in thought and action and example to make my life sweet and useful.” 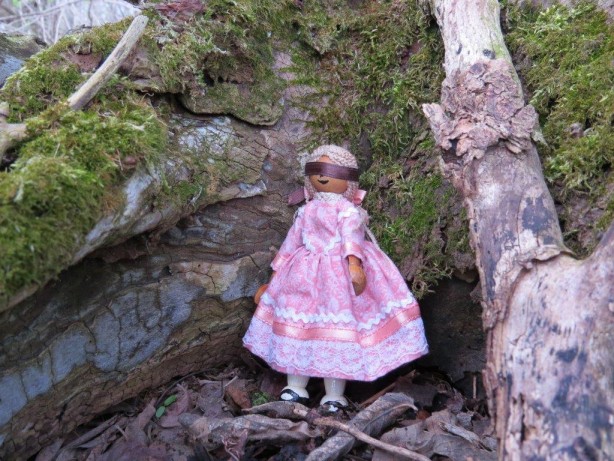 One Christmas, Miss Sullivan presented Helen with a canary.   “Little Tim was so tame that he would hop on my finger and eat candied cherries out of my hand.  Miss Sullivan taught me to take all the care of my new pet.   … One morning I left the cage on the window seat while I went to fetch water for his bath.  When I returned I felt a big cat brush past me as I opened the door.  At first I did not realize what had happened; but when I put my hand in the cage and Tim’s pretty wings did not meet my touch… I knew that I should never see my sweet little singer again.” 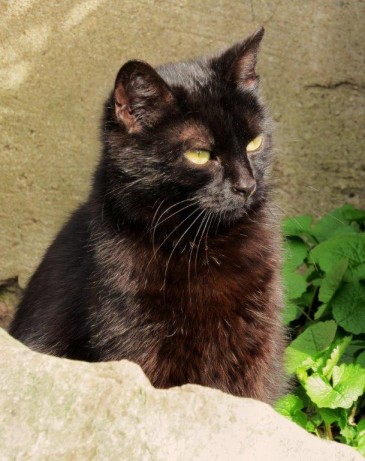 As Helen’s knowledge and understanding grew, she began to ask questions.  Lots of questions.  Miss Sullivan was then working to explain to her abstract ideas like love, and how to join in a conversation with others.  In 1890 Helen began to learn to speak!

Helen was so thirsty for knowledge, she learned to read the raised print of braille, and devoured many books.  She set out to teach herself to read in French.  Later in Latin, and also in German.  I was so amazed at how she grew and expanded her skills!  She attended a school for the deaf.  Then she set her sights on regular school and college too!   Anne Sullivan helped her every step of the way, reading many textbooks into her hand manually.

One challenge was exams, which Helen would type out on a typewriter, but there was usually no time to go back and have someone reread it so she could correct what she had written.  Just one of the many challenges of not being able to see.

She reveled in all the learning, but regretted one thing: “The one I felt and still feel most is lack of time.  I used to have time to think, to reflect, my mind and I … in college there is no time to commune with one’s thoughts… one leaves the dearest pleasures – solitude, books, and imagination outside with the whispering pines.” 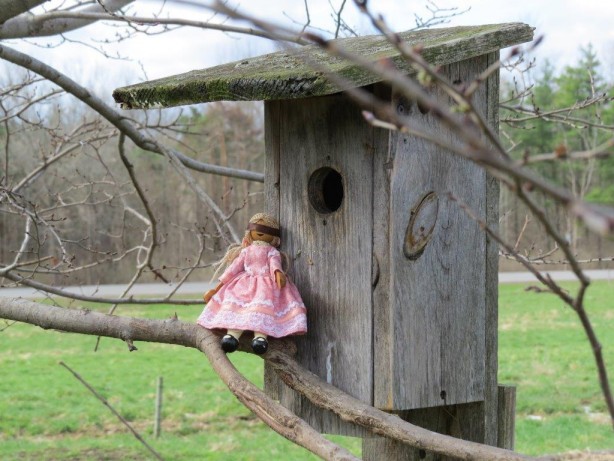 I was interested to read of her visiting Niagara Falls, not far from where I live.  She said, “It is difficult to describe my emotions when I stood on the point which overhangs the American Falls and felt the air vibrate and the earth tremble.”  People were amazed that she should be impressed by such wonders that she could not even see  “They forget that my whole body is alive to the conditions about me, the rumble and roar…”

The book, “The Story of My Life” was written in Helen’s college days.  So I have not read further about her life yet.  But I have found another book, and there I hope to meet Polly and find out more of the amazing life of this gifted woman.  She learned to make the best of what she had been given, though it was not the same lot as the rest of us.

Meanwhile, I am giving thanks that I have been granted the gift of sight!  What a treat to get this great picture of a bluebird in my own backyard. 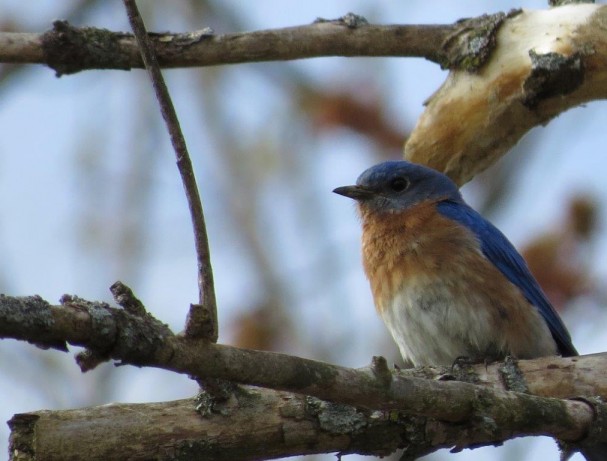