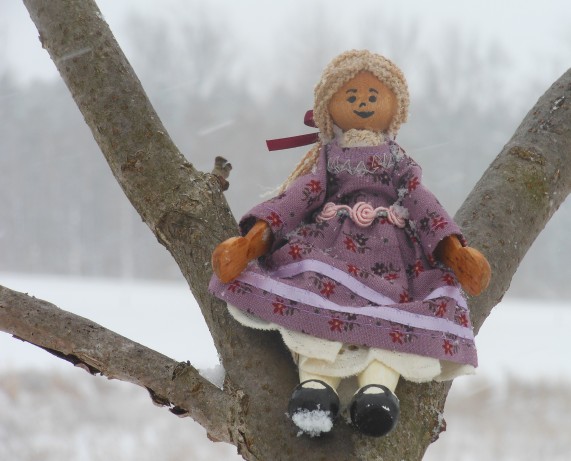 We have had such a mild winter this year, the temperatures have often been above freezing, so we are sorry that we haven’t seen much snow.  This past week we had such a mighty snowfall, all in one day, that Penny begged to go out and play.  I donned my big boots and lots of layers and out I went to play with her.  I had to carry her through the deep snow, glad for my snow boots and wool socks. 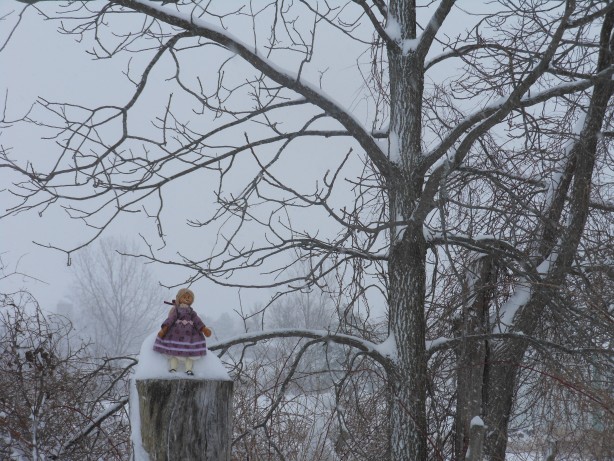 Pardon the snowflake that looks like Penny’s mustache here, but it was snowing pretty heavily.  Too bad the camera doesn’t catch its movement.  Or the sound.  I love the quiet sound of snow falling. 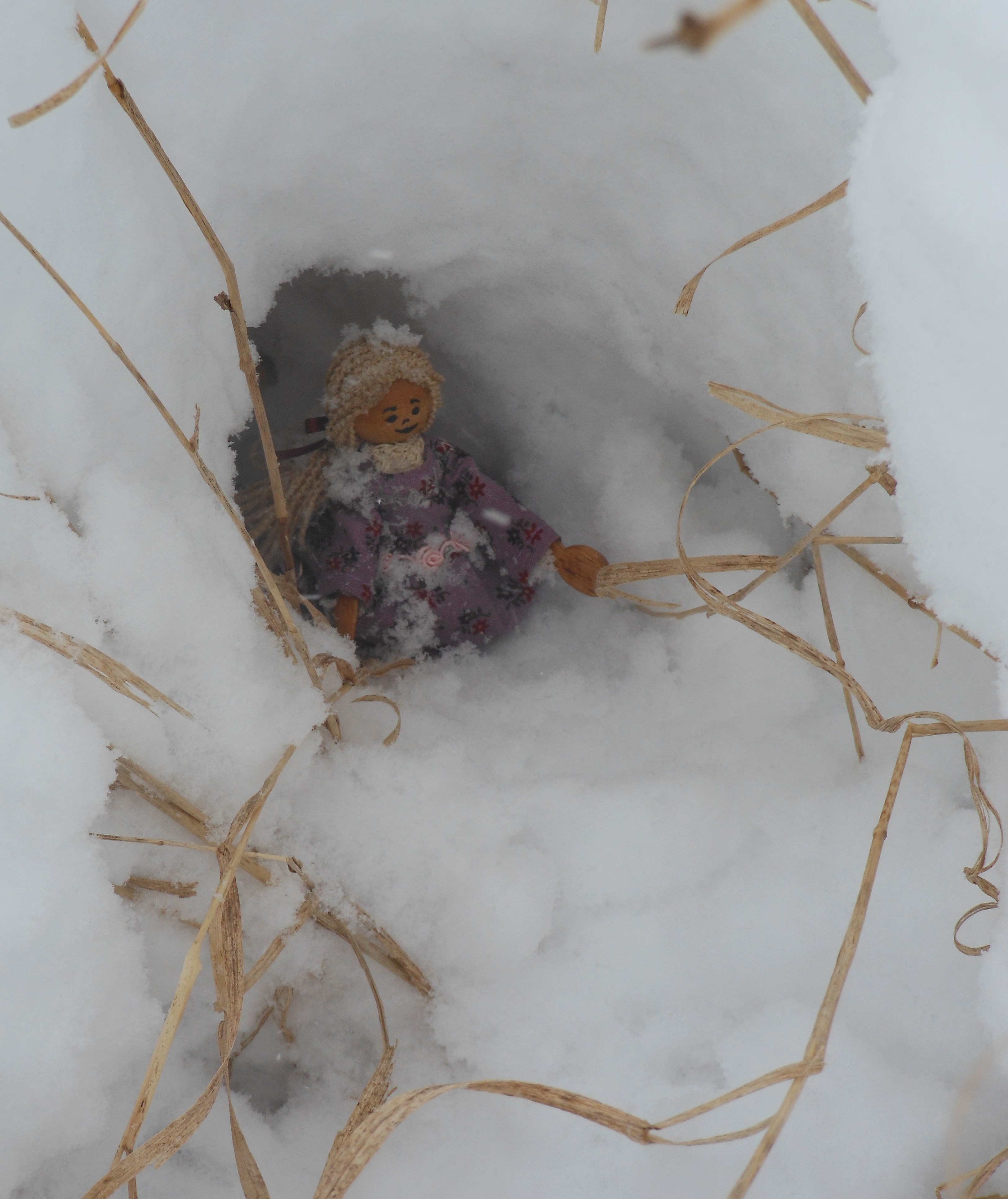 Penny was pretending she was a rabbit and digging a deep underground burrow. 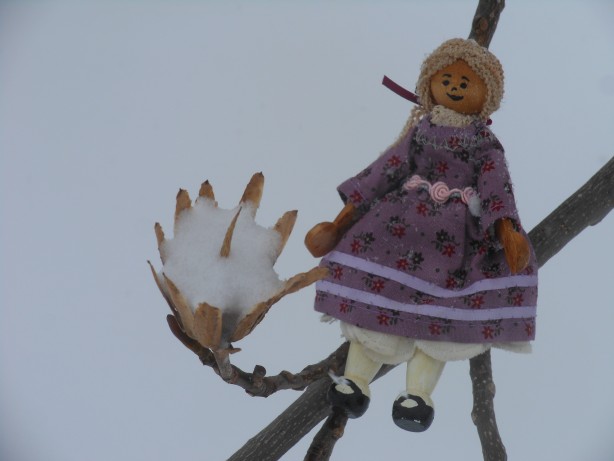 And now she is a bird in a tree.  She was fascinated by this cup of snow, formed by the remains of a tulip tree blossom. 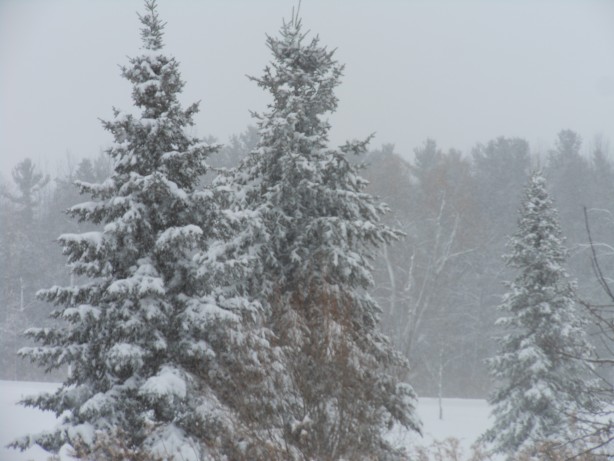 Wow, Penny, aren’t you getting cold out here in the snow?  Yes, she says, and might she just sit a spell inside my warm alpaca hat?  This is one I spun and knit from the fleece shorn off my own alpaca, Snufflesworth.  It makes a very warm hat for me, and a warm place to rest if you are a little bit of a person and a little bit chilled. 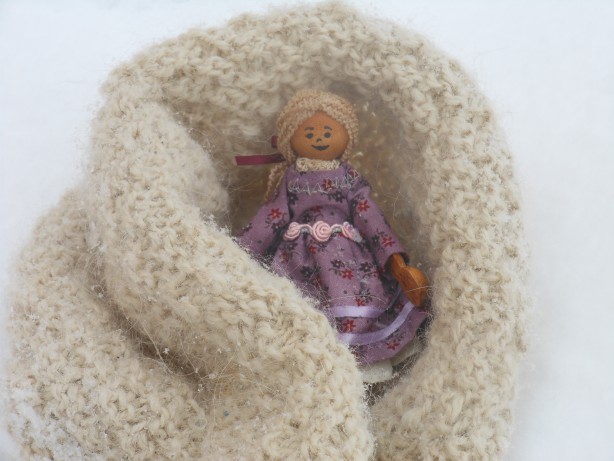 But please, she begs, don’t lets go inside yet, I’d like to ride my donkey over the snow banks for a while. 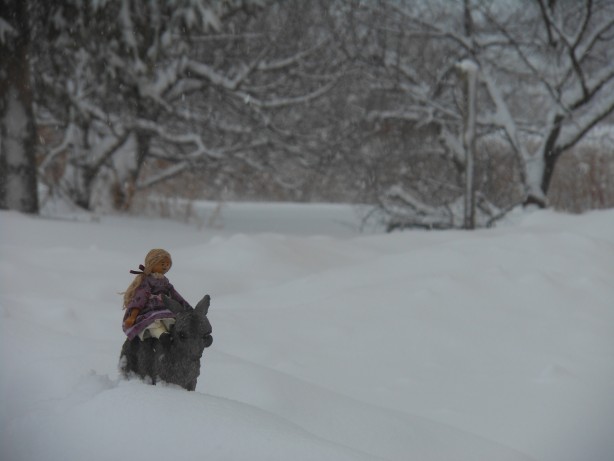 We have a real live donkey named Dinklepuss on our farm, and this is Penny’s own miniature Dinklepuss.  He has the same big ears and gentle eyes.  Only he is made of resin.  Isn’t he cute? 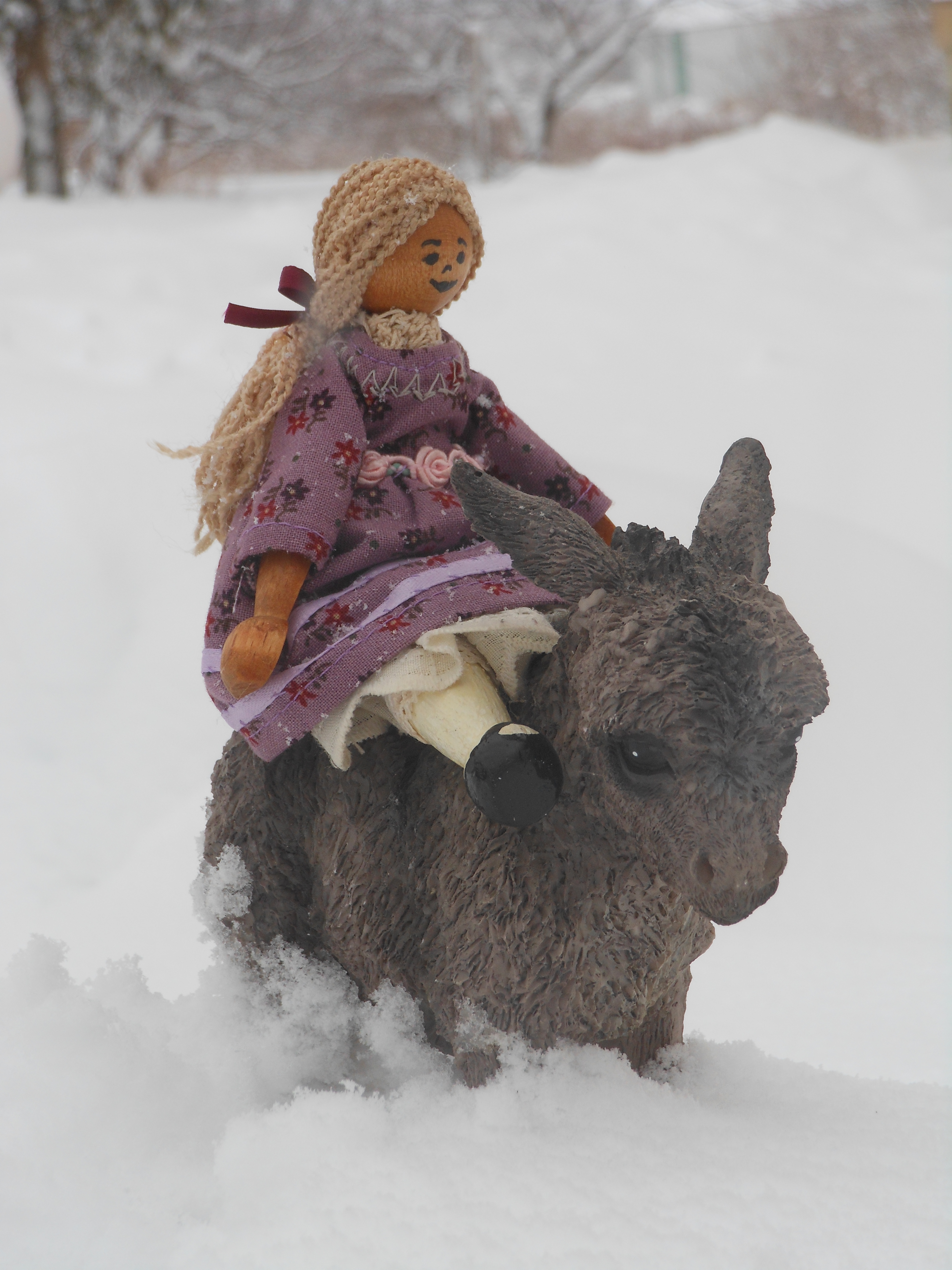 The next morning, after our outside jaunt, I captured a picture of these ice flakes on our window.  What splendid miniature artwork! 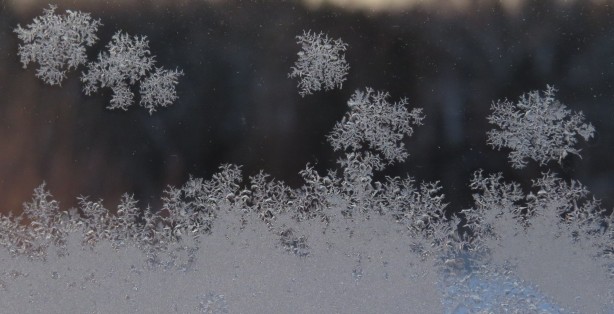 And two days later, such a glorious morning of sunshine, but alas, the snow is all melting today. 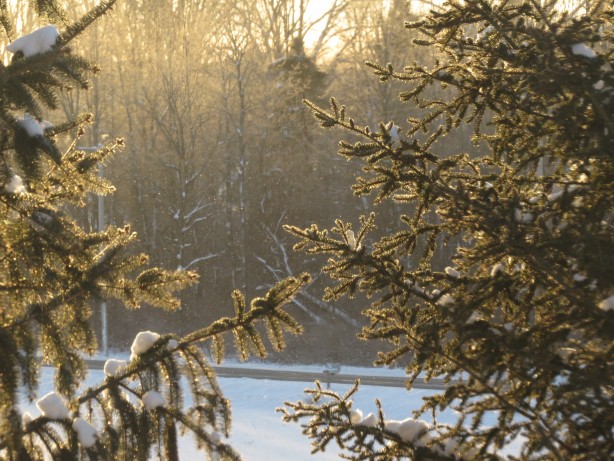 The suet bird feeder on the porch has been a busy place. Here I only have shown sparrows, but we have also had juncos and woodpeckers regularly that are fun to watch as they peck away at the seed while swinging in the breeze. 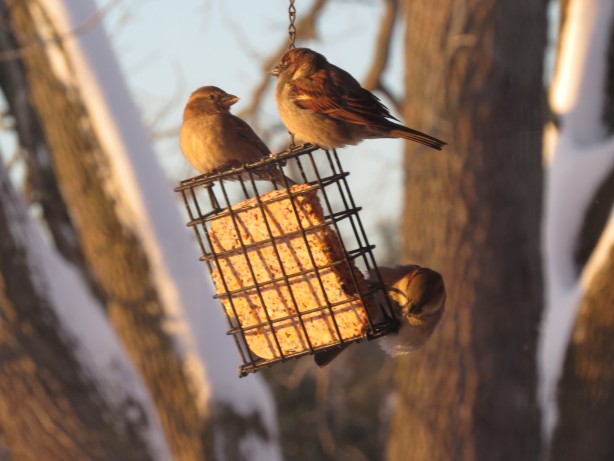 Oh, look!  Here are little birdie tracks, hop, hop, hopping along in the melting snow.    I’m glad we had our play day out when the snow was cold and deep and fluffy. 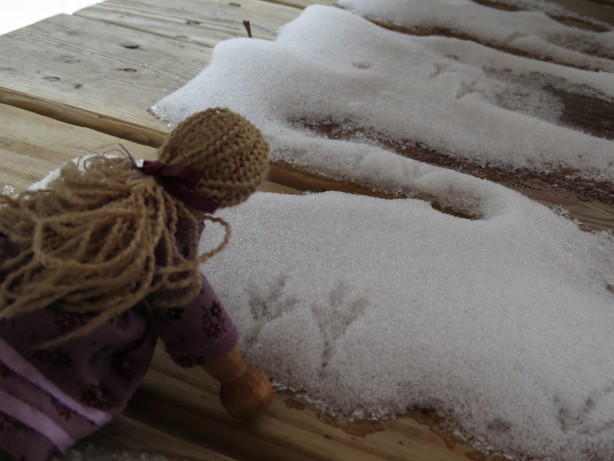 It is windy today, don’t you love how that horse tail is swooshing back in the breeze?  I like to see the little paths that the horses make through the snow in their pasture.  How do they decide which way to go? 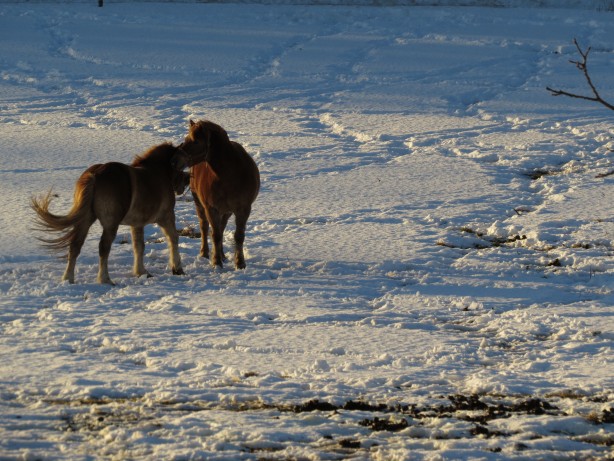 This last picture is rather pretty, though I think it is sad to watch the snow melt so soon.  The early sun was shining across the dimpled surface as more and more grass appeared. 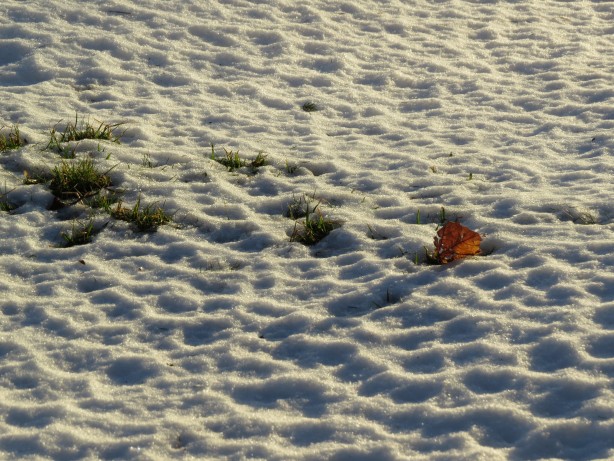 The End.  I’m glad that we could share these snow adventures with you, we are thankful to live in a place with such varied beauties outdoors.

What a wonder-filled world God has made. 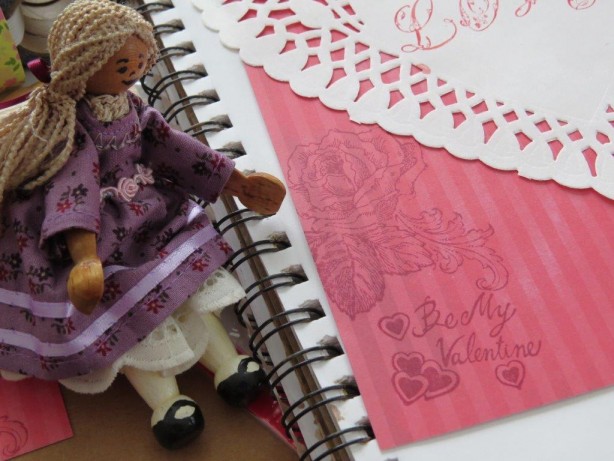 On Monday, February 15th, our little art group got together to create another page in our Gratitude Journal.  Our topic this time was Valentines, of course!  Hannah brought a pile of paper doilies, some shaped as hearts and some round.  Its always fun to see each person design their own page in their own way.  What great creativity fills this room.  Penny was busy inspecting and admiring.

Here we are gathered around the work table in my craft room. 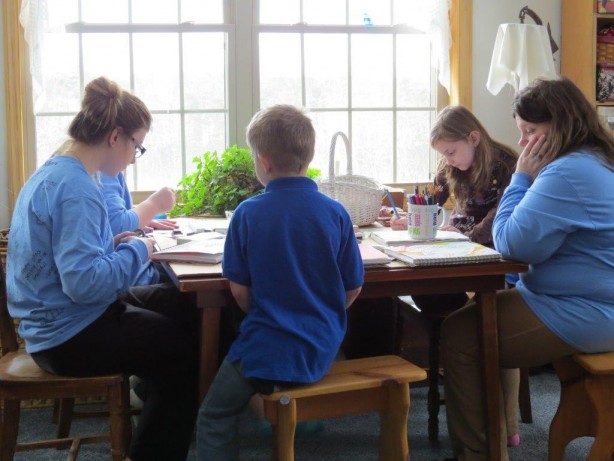 Ariellah, (8) watercolored over her doilies and is now peeling them off.  Penny is excited to see the pretty pattern underneath. 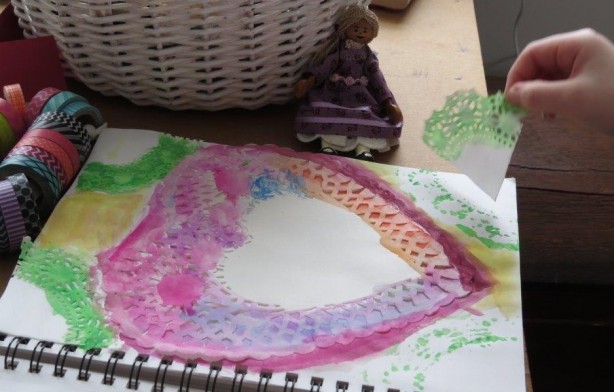 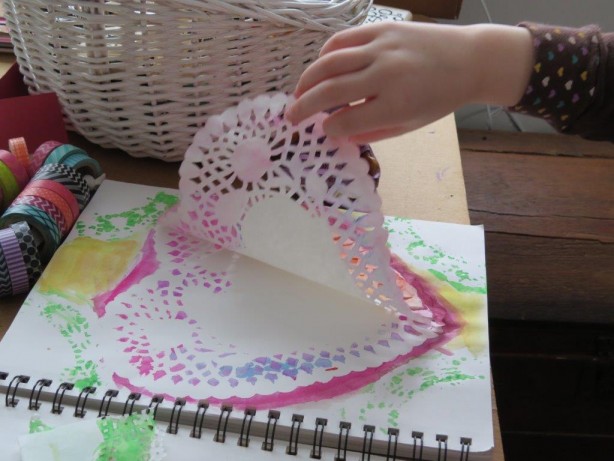 The two older girls are carefully creating their masterpieces. 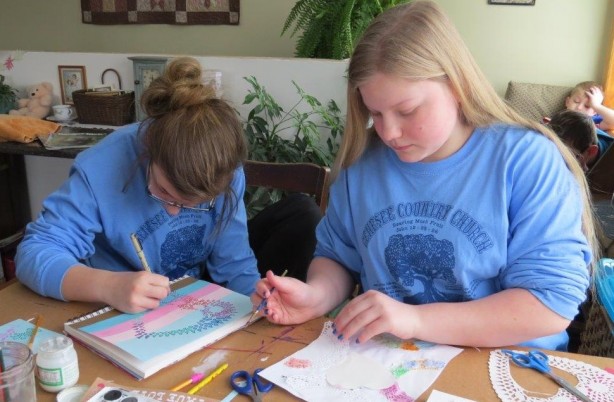 The boys are enjoying the window seat to read in. 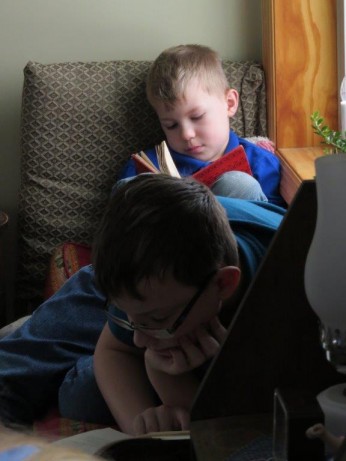 Celestia water colored over her heart doily, and is now giving it a stained glass look by outlining the individual shapes.  That sure makes it look classy. 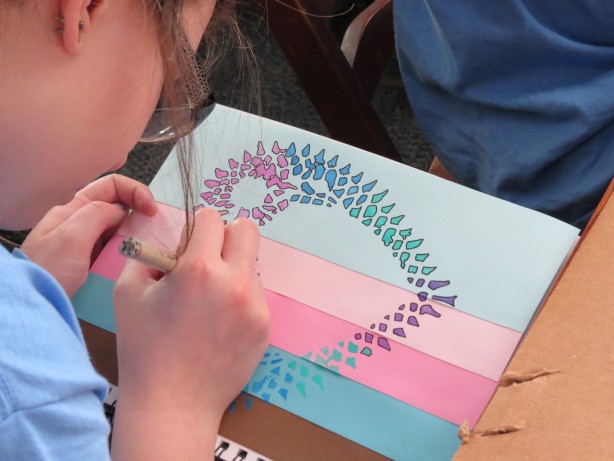 Kahlan used a pouncer to ink over her doilies. 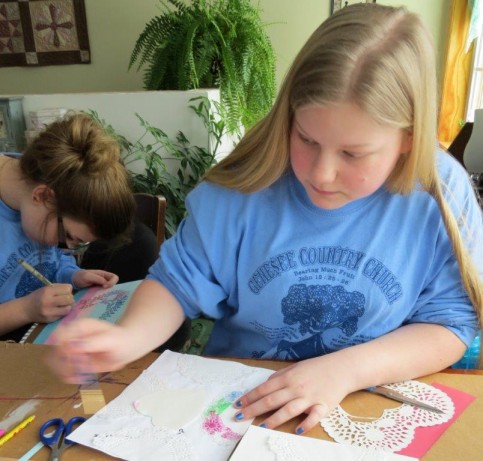 Ariellah added a teddy bear, some roses and a list of things she loves and is grateful for. 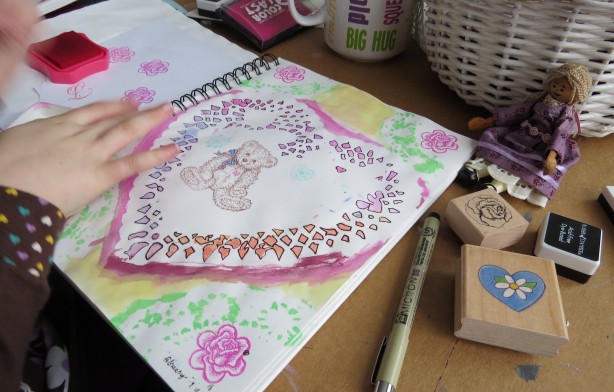 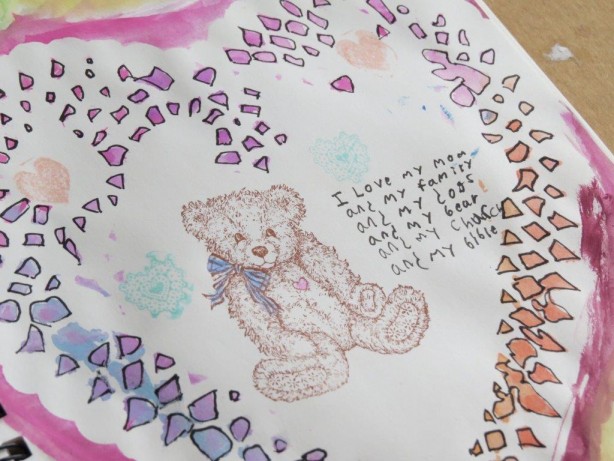 Hannah’s finished page.  I love the intensity and the blending of the colors she used when water coloring. 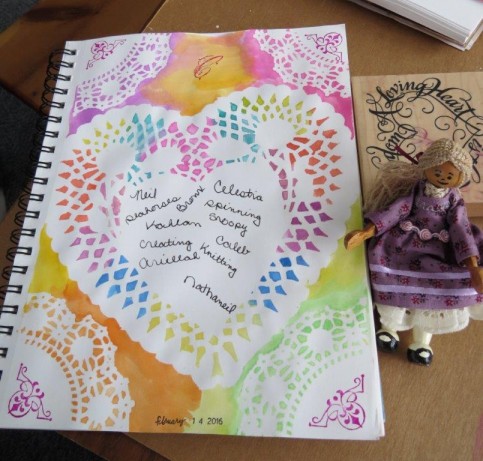 Celestia’s finished page, “Love is the master key that unlocks the gates of happiness.” 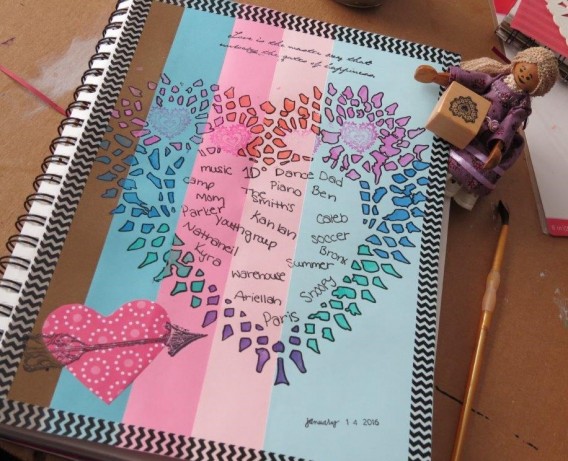 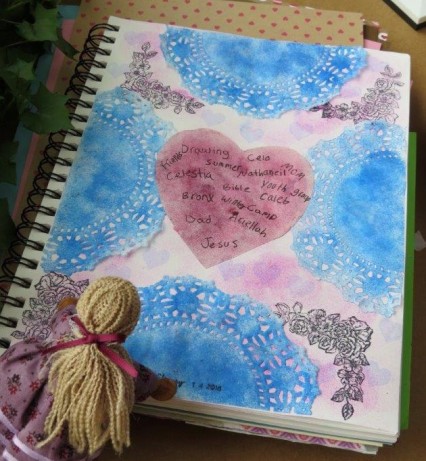 My own page with lots of background stamps, one is a quote by Helen Keller:  “The best and most beautiful things cannot be seen or even touched, they must be felt with the heart.” 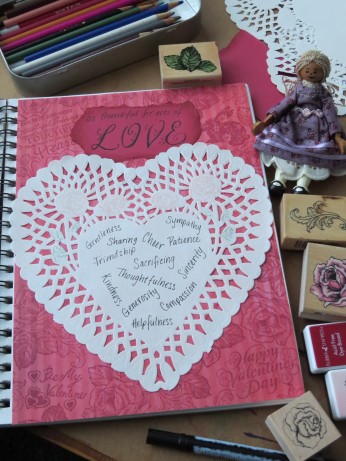 We all enjoyed raspberry scones afterwards, and Penny enjoyed making her very own wee little ones.  Notice also that Penny has a new dress for 2016!  She was thrilled when I added the little roses to the waistline. 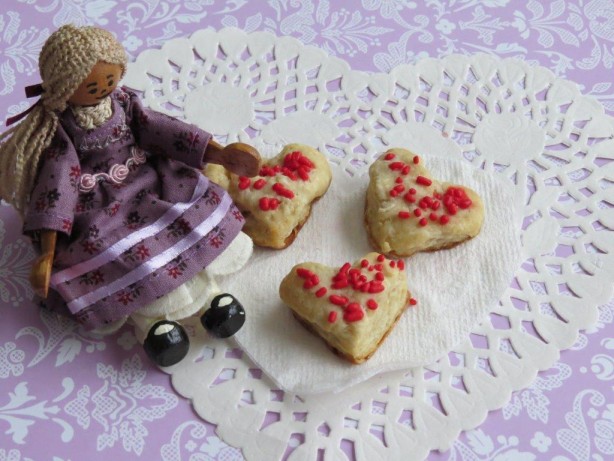 Clean up time is a breeze with so many helpers, though we always make a tremendous mess!  What fun we have doing this together.  We are working on a gratitude page each week in our art journals and look forward to seeing the collection we will create by the end of the year. 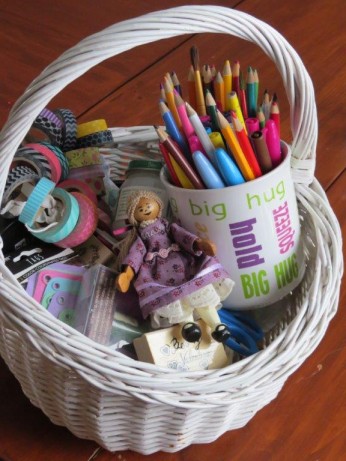